Published by Suspicious Behaviour Products, Invasion From Planet Wrestletopia proves itself to be an incredibly vibrant book, which is bursting at the seams with plenty of charm and  entertainment. Writers, Ed Kuehnel and Matt Entin provide the audience with the outlandish story of  wrestler Rory “Rock N Roll” Landell, a presumably beloved wrestler who fails to attain the proper support and acclaim from the wrestling promotion which he works for. Disillusioned by the wrestling promotions inability to recognise his worth, Rory “Rock N Roll” Landell crowns himself Galactic Champion Of The Universe during an interview and boasts of his wrestling prowess. Although Invasion From Planet Wrestletopiais seemingly light on twists, issue 1’s final pages result in an incredibly fun reveal which provides the main crux for issue 2. 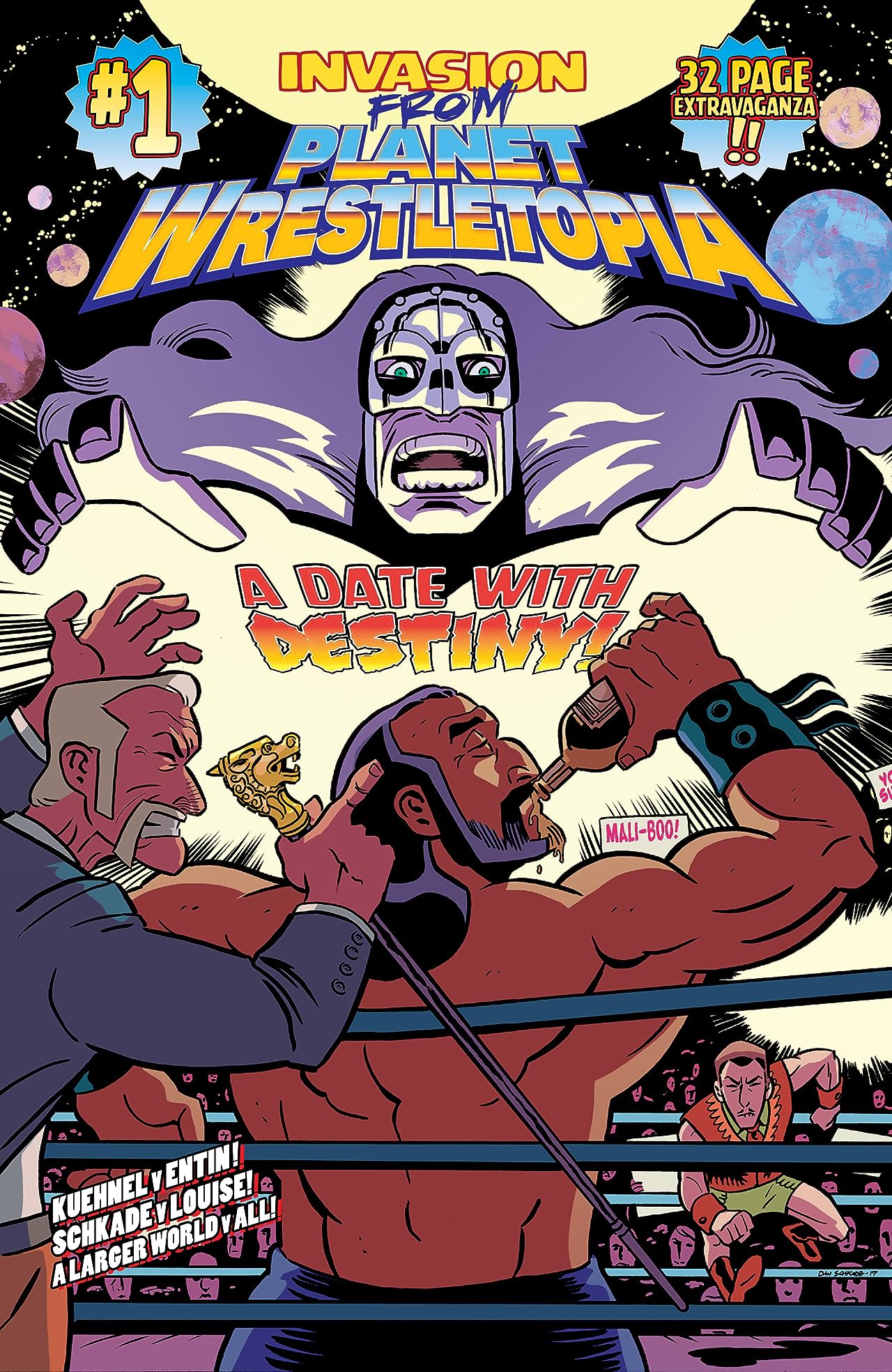 Invasion From Planet Wrestletopia – A Date with Destiny #1

Whilst Invasion From Planet Wrestletopia #1& #2 feature a rather straightforward plot and storytelling, the titles braggadocios tone and fittingly bold/idiosyncratic artwork are enough to prevent Invasion From Planet Wrestletopia from languishing in relative monotony. In fact, Dan Schkade’srather animated artwork and Marissa Louise’s boisterous colours are more than enough to make up for the simplistic storytelling. Working in conjunction with one another, the bold artwork and exuberant colours effectively communicate the spirited/rollicking nature of the world which the audience is presented with. Equally as important as the dynamic artwork/colouring, the flamboyant vernacular used within the characters dialogue further communicates the zany tone created by the artwork and the showmanship long associated with wrestling in general.

The protagonist of Invasion From Wrestletopia proves himself to be an incredibly engaging feature of the book, with his intense bravado and unashamedly absurd swagger working in tandem with the books other fantastical elements. Rory “Rock N Roll” Landell is a character who knows exactly what kind of property exists within and relishes in his absurdity. However, hiding underneath all of Rory’s insanity is a healthy dose of pathos, which ensures that the character refrains from becoming too absurd and could potentially pave the way for Rory “Rock N Roll” Landell to undergo significant character development.

Overall, Invasion From Wrestletopia is an incredibly fun and engaging read.

Whilst the storytelling offers little to no surprises, the comics main strengths lie within its fantastical and idiosyncratic tone. Ultimately, I’d recommend it to any reader looking for some inconsequential fun.