Memes. Memes have been the sole driving tool behind human civilization. Yes, even the 21st century’s own humorous, viral orientated, understanding of the all-encompassing entity. Whilst “internet memes” are seen to be considered as subjects of humour and political propagandizing, the academic meaning of the word “meme” was explained by Richard Dawkins in his 1976 book, “The Selfish Gene”.  Dawkins, broke down the meaning of the term, stating it as an idea, behaviour or style that spreads from person to person within a culture, in the aim of creating a new type of phenomena, to spread like a genome if you will.

Dawkins saw that evolution depended not on the particular chemical basis of genetics, but on the existence of a self-replicating unit of transmission. Dawkins saw “memes” exemplifying that same self-replicating dynamic with its significance based around the understanding of human behaviour and cultural evolution. You could argue that this very blog and this piece is in itself is a meme, creating an idea, a think-piece, that spreads like a written genome synced in to the overall groupthink database that is the internet.

The meme dynamic is a very interesting subject matter especially in our current digital age but my understanding of the term only came into my periphery when I was about 13. It was the holiday season in 2003, I had started playing a game I got as a Christmas present. This game went by the name of Metal Gear Solid 2.

Playing this game as a 13-year-old, many of its themes and meta-narratives went completely over my head. MGS2’s narratives which delved heavily on current affairs exposition at the time of its release (2001) combined with its other-worldness aspects left me in a complete loop. I didn’t know where to begin or what to understand I just thought at the time it was an intense convoluted roller-coaster ride of a story.

After multiple play-throughs, growing up into adulthood, a refined development of my world view and further sources of analysis on the text, I realized that I had witnessed not just a masterpiece text in videogames but as I will go on to illustrate, a text which has laid prophecy to our now entrenched 21st century reality.

To understand the premise of the game, you have to understand its underlying themes and the game’s backdrop. First of all, the game’s premise and thematic approach was one based on the notions of “memes”. Hideo Kojima the creator of the game and the entire franchise had different themes for all the major iterations of the franchise for e.g. MGS1’s inherent theme is one based off GENE, the notion of what biological genes to pass on to the next generation. MGS2’s thematic approach is based off the notions of MEME’s which is also the theme of this piece. Whilst MGS3’s undercurrent theme is based off SCENE etc. Under these auspices MGS2’s narratives were grounded in trying to understand what the idea of a “meme” is. And this is where the backdrop of the game and its release becomes important.

MGS2’s impending release in 2001 was under incredible levels of hype after the critical and financial success of MGS1. Hideo Kojima, the game’s creator, was under huge pressure by the fans and the general gaming community to curate a sequel that even surpassed the greatness of the first Metal Gear Solid. He was expected to make a game that laid huge fan-service for its adoring fans and just continuing where the story left off in MGS1. Kojima in a sense grew tired of the furore and weight of expectations that followed MGS2’s release so he devised a quite extraordinary plan.

When you first start off in MGS2, it plays off like how the fans would’ve expected with its protagonist Solid Snake, the hero of the franchise embarking on another reconnaissance mission, on a Tanker.  However, what was to come would be the greatest bait and switch in all of video game history. The middle of the game was flipped entirely on its head, with a new protagonist called Raiden taking up the spotlight where Solid Snake had abruptly left off. His overall persona paled in comparison to the sheer presence of the fan-favourite Solid Snake. Many fans in the West especially complained about his femininity, general weakness and naivety throughout the latter half of the game 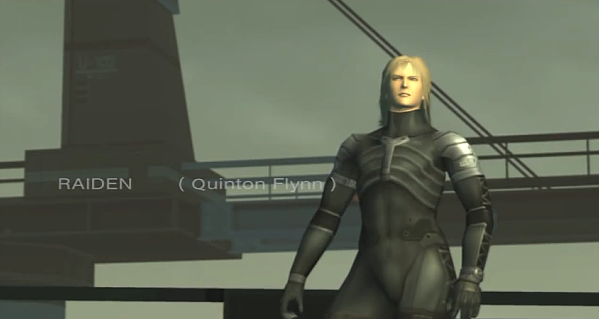 Gamers alike, including myself wondered why would Kojima switch the main protagonist of the game like this and in this manner? Even on the game’s covers there’s no sign of Raiden, no sign of Raiden in any of the promotional trailers, not even a hint. I then realised it was completely Kojima’s intentions. He completely intended for all of the fans to be baited into the message he was trying to portray not just in the game but of society as a whole.

Soon after, MGS2 was infamous for this dynamic, as gamers alike viewed it as an inherent flaw of the game to make such a divergent switch. However, later on large parts of the gaming community caught on to the bigger picture that Kojima had tried to convey.

The main narrative of the game is what do we as a species discern to be true? What do we as a species determine to be valid? What piece of information do we decide is right to pass on to the next generation? For the majority of the game, the second protagonist Raiden is being issued orders by a very shady “Colonel” Campbell, “apparent” head of a seemingly disbanded organization Foxhound and the former boss of Solid Snake during the previous Metal Gear iteration.

At the end of it all, everything about the mission comes to light. That the entire mission was a lie based off an exercise to teach an extensive A.I. system (called JD and GW) about extreme scenarios like the events that took place in the game. The incidents in MGS2 was modelled on the events that had already taken place in MGS1, as a way of teaching the A.I. system what information was deemed valid for use for future purposes. As Raiden started to really question his reality in the narrative, so did I, the player. That is no coincidence. As Kojima deemed Raiden as the eyes of the player, someone led by the bait on a rod, believing whatever information created and regurgitated no matter the level of their validity. 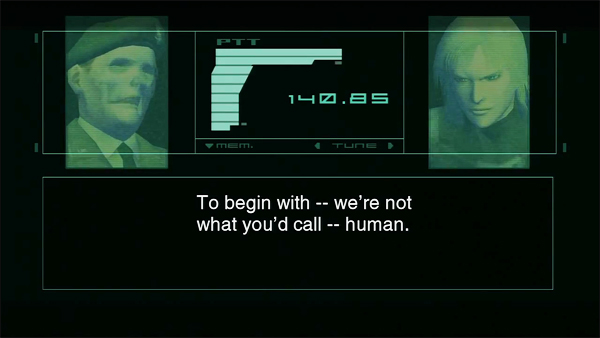 Conservation with JD and GW, the AI of the Patriots

It makes you wonder in our digital age, of cryptocurrencies, alternative facts, fake news, social media and heightened blogosphere, how do we discern what information is valid or invalid? How do we incubate a screening process where information has become as easily attainable as grabbing a glass of water? In the game, near the end where Raiden confronts the A.I., JD and GW explain what will inevitably happen once information becomes free flowing with no screening process. Individuals that were once powerless become powerful, with groups of people falling into their own gated community chiming at the others for being on the other “team” (political parties, religious, social class, ethnicity etc.)

Being overloaded with infinite amounts of information would see society eat itself from within. They iterate that the world will not go out with a bang but with a whimper. In the eyes of the JD and GW AI systems, human beings lack the capacity to create and understand context and that through the “exercise”/mission (also known as the S3 plan) encountered in the second half of the game that it would embark on a process of creating context for the species and society as a whole.

Very strong stuff, right? I learned this all at the mere age of 13. It’s only when you look back and couple it with events that are happening in the real world today that you realize how prophetic the game really was. The rise of A.I., VR, the complete digitisation of society, fake news etc. Its only now because of the two most glass-shattering political events of the last 20 years, the Brexit referendum and the election of Donald Trump that people are now starting to take in the genius of the game.

The fact that a game, so overlooked because of it’s so called “flaws” is only now coming into light because of its underlying message, because it was so ahead of its time. In the end, you have to take down the antagonist, Solidus Snake aka a clone brother of Solid Snake.

He wants to bring an end of the AI system and free the world from the Patriots grasp (MGS’s own version of the Illuminati). In a weird way, Kojima made the player, the antagonist by killing the threat that aimed in unshackling the Patriots grasp of society. You, the player did this because you were only following what you were told to do. What you had thought was the undeniable truth, the right thing to do. But in the end, it was all a lie and you were the agent of chaos, a tool for the Patriots to help expand their control on humanity. This is what Kojima wanted to convey to the player. Kojima wanted to send a message based on the player not believing everything you read or see as fact.  To take your reality with a pinch of salt. At the end, there’s a final message conveyed by Solid Snake who is meant to act as the voice of Kojima relaying the message to the player. 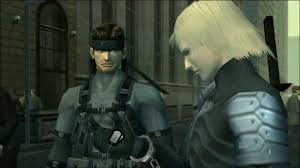 Snake and Raiden at the end of the game discussing what to discern as real or fake. This was Kojima’s message to the player.

Bear in mind, this game came out in 2001. It was completely ahead of its time as we are now seeing. For its enduring prescience, it has to be conveyed, relayed and more importantly remembered as a watershed signpost for the video game medium. Just because it’s a video game doesn’t mean it should be dismissed as a valid source of intellectual nourishment. Metal Gear Solid 2, was my red-pill at the age of 13, helped to shape my world-view and to this day still blows my mind with its seemingly prophetic,multi-layered, post-modern message. 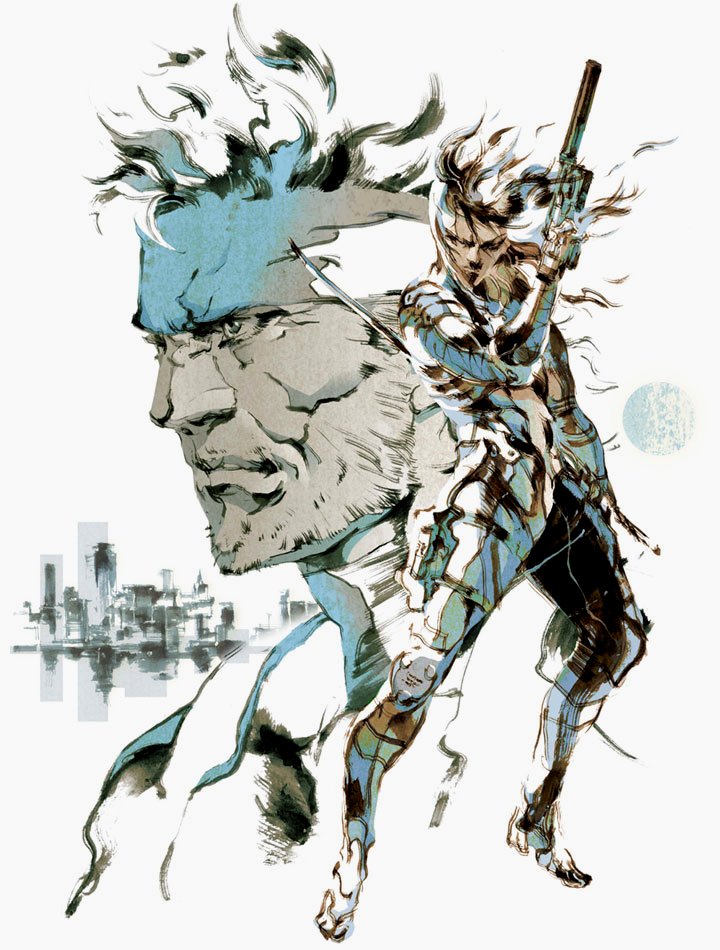 All of the things I have disclosed in this piece are the reasons why for me, MGS2 is the greatest game of all time and why I would recommend anybody to give it a play or a watch on YouTube (Kefka Productions) to learn of its unremitting, unrelenting genius.